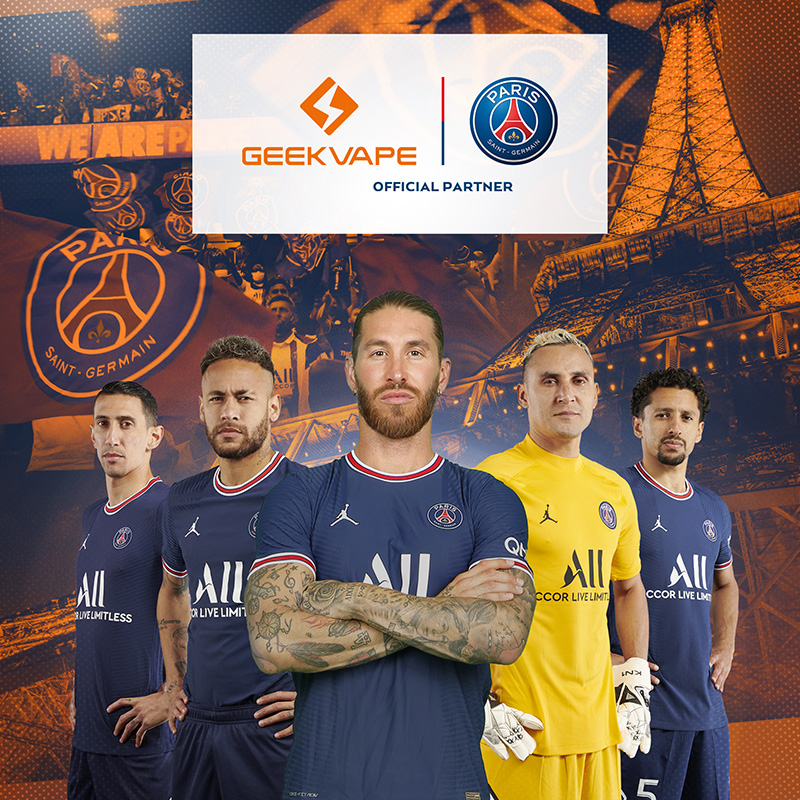 On July 23rd (GMT+8), before the new Ligue 1 season kicks off, Geekvape, the world-renowned vape brand, and Paris Saint-Germain, the European football powerhouse, announced together the official partnership starting from the 2021-2022 season. It is the first time in history that a football giant partners with a vape brand. Both sides will work together on campaigns, TV commercials and co-branded products in authorized countries. Geekvape fans around the world will also have the opportunity to see the team in real life.

Elegance, and Excellence
“Geekvape has always followed a brand concept of ‘Love of Life’ and building an excellent life experience, while Paris Saint-Germain is known for playing elegant football ” said Allen Yang, the CEO of Geekvape Technology. “In their own sectors, Geekvape and Paris Saint-Germain are sharing the same passion for ‘Excellence’ and ‘Elegance.’ And based on this common idea, we have come together today. Six years after its creation, Geekvape has grown into an international brand serving millions of users around the globe. The partnership with Paris Saint-Germain is an essential step in its brand strategic upgrade and will, at the same time, attract more users to feel the positive energy brought by football through Paris Saint-Germain’s football magic.”

Marc Armstrong, Paris Saint-Germain’s Chief Partnerships Officer, said: “We are delighted to welcome Geekvape to the Paris Saint-Germain family. Geekvape is an innovative Chinese brand with worldwide ambition. We both share the same determination to ally excellence and elegance. We are looking forward to working together to develop creative campaigns.”

About Geekvape
Geekvape, founded in 2015, is an innovative technology company headquartered in Shenzhen, China. Geekvape’s mission is to build a creative life experience and provide a reliable product experience. For a long time, Geekvape continuously creates and thinks differently, aiming to positively impact society.

About Paris Saint-Germain
Paris Saint-Germain football club was created in 1970 and celebrated its 50th anniversary in 2020. Since QSI’s purchase of the club in 2011, it has transformed to become one of the top football clubs and global sports brands in the world. The club has since then won 27 trophies in only ten years, 43 in its history, becoming the most successful football club in France. Paris Saint-Germain has attracted many great players including Ronaldinho, Beckham, Ibrahimovic, and currently Neymar Jr and Mbappé, both ranked amongst the top players in the world. The international popularity of the club never stops growing. It is now the one of the most followed club in the world, expanding from zero to a community over 100 million social media followers in just ten years. The pioneering sports club which now includes men’s football, women’s football, handball and judo added esports in 2016. Giving back to the community is fundamental to the club who has drastically increased the capacity of its Foundation to develop large programs for underprivileged youths.